Farming Days of the Past

The Early Farming display behind the log cabin focuses on the days when “horsepower” meant powered by horses.  Lots of hand work and mechanical devices powered by human labor, horse or oxen was used by farm families in the area. Early Norwegian families tended to be large, perhaps to help create their own work force.  Neighbors helped neighbors for the extra large projects such as barn raising, picking corn and thrashing wheat.  And there was always livestock to care for because they provided the protein necessary for growing families as well as the power for many farming activities..

In 1849 the 32 farms in the Town of Dunn, including the future McFarland, produced lots of wheat with smaller amounts of oats, corn and barley. The village began with the coming of the railroad during the “wheat boom of 1855” and the construction of the depot connected the Norwegian farmers to the outside world. Wheat farming gave way to dairying, the raising of livestock and the production of tobacco. Farming became a commercial venture with the connection to big city markets. 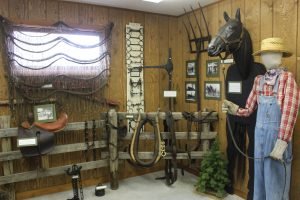 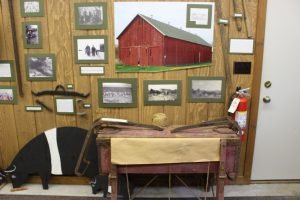 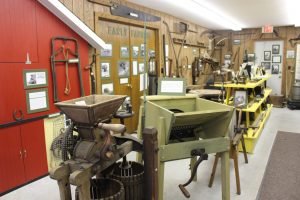 The McFarland Historical Society’s Museum, Norwegian Log Cabin and Farm Display at 5814 Main Street, and the Larson House Museum at 6003 Exchange Street are open to the public on Sunday afternoons from 1 to 4 pm from Memorial Day through September.  Covid vaccinations are required for those 12 and up and masks are required for children 5 to 11.  Admittance is free and donations are encouraged.  For tours by special appointment, contact Dale Marsden at 608-838-3992 or Jane Licht at 608-838-8178.