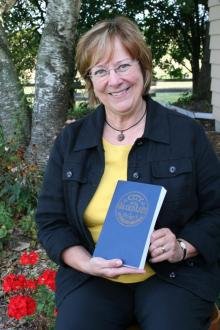 Meg Nielsen recently donated proceeds from a book she co-authored for the purchase and restoration of the historic Larson House in McFarland.  Back in 1975, Meg Nielsen, Barbara Houghton and Jane Licht poured over old records and interviewed over a hundred residents to write and publish City of the Second Lake, a History of McFarland, Wisconsin.  Meg explained, “As a relative newcomer to this community, I wanted to know more about the history of the place where we were putting down roots.  In whose footsteps did we follow?  I was very curious.”  As a bicentennial project, the first edition of the book sold out in 3 months.  Several years later, the second edition also sold out.

Then in 1998, Meg thought it would be good to create a revised and updated version so she called upon her friends Barbara and Jane to work again on this interesting project.   A different set of old photos were used, maps were added, and a chapter on the Town of Dunn history was written.

Now, in 2010, Meg had the idea that the proceeds from this book that were sitting in the McFarland State Bank could be best used as a contribution to the McFarland Historical Society for the Larson House.  She checked with Barbara and Jane who were very enthusiastic about her idea, and so, she presented the Board of Directors with a check for $3000.  Meg also gave the Board the remaining copies of the book for the Society to sell and reap the profits from.

Meg remembers interviewing the elderly sisters Bertha and Tonetta Larson in their lovely Victorian style home on the corner of Exchange and Farwell back in 1975.  Meg wrote the chapter on Lake Waubesa that included information about John Larson who was father to Bertha and Tonetta.  The entire family enjoyed a prominent place in the community in the early 1900’s.  But in 1988, Bertha died and was the last person to live in the house. “To see the house vacant and crumbling from neglect broke my heart,” said Meg.

“What really motivated me to make this donation was when Crystal Lokken died.  Crystal had been such a passionate supporter of the project to purchase and restore the Larson House.  When she died, I wanted to help carry on where she left off.”

Meg was glad to discover that the gift from herself and the other two authors was being doubled, matched by an anonymous donor who will continue to do so up to $10,000.  Therefore, the gifts given in September and possibly October will likely be doubled as well.