Posted at 13:48h in Uncategorized by Jane Licht 0 Comments
Share

On the 11th hour of the 11th day of the 11th month in 1918, the guns of World War I were finally silenced.  It was the Armistice signed by Germany. 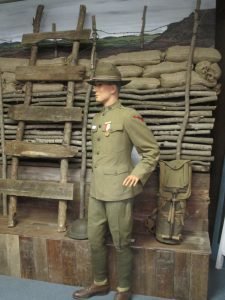 The Allied forces had won the bloodiest war in the history of mankind. To commemorate the Armistice and the sacrifice made by soldiers from our McFarland area, there will be an open house at the McFarland Historical Society on Sunday, November 11 from 1 to 4 pm.  At 2 pm there will be a special ceremony and everyone is invited to attend.  The lobby display features a trench that was used in the trench warfare of WWI and many historical artifacts from that war. 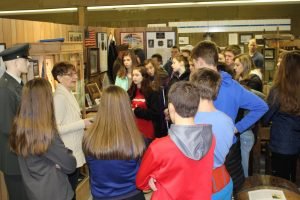 Inside the museum proper is a Gold Star Mother’s Display.  Mothers of soldiers in the war would display blue stars in their windows.  If their son died, a gold star would replace the blue.  The Gold Star Mother’s Display is permanent but the Lobby display will be removed shortly after the November 11th open house.  Parents and grandparents are encouraged to bring their children and grandchildren so that this important chapter in our history is not lost.