The Jenny Lind bed in the center of this exhibit was named after the famous Swedish opera singer born Johanna Marie Lind in 1820. Jenny Lind sailed to New York in 1850 to tour the United States at the invitation of P.T. Barnum. Jenny became very fond of a particular spool-turned bed during her visit to America and almost immediately spool-turned beds were affectionately called “Jenny Linds.” Spool beds had been made in America since the early 1800’s but became very popular mid-century when the multiple cutting head lathe was invented, making mass production possible. Jenny Lind beds were popular into the 1930’s.

The bed is covered with a quilt made about 1880 that is stuffed with feathers and made by Clara Vinge Holland. The 1880 linen sheet is decorated with hand-embroidered cutwork. A foot-warmer and an unusual rounded chest sit at the foot of the bed.

The commode holds a unique matching set of bowl, pitcher, wastewater container and chamber pot with a blue bird design. Indoor plumbing was not common in the 1800’s. A pitcher, bowl and chamber pot were found in every “bedchamber.”

The bench/storage chest decorated with rosemaling is from Norway. The 1900 doll buggy belonged to Benetta Dyerson and Hannah Dale’s childhood doll enjoys a ride in it. Dale Street (pronounced “day-ley”) in McFarland and Dyerson Road (pronounced “deer-son”) in the Town of Dunn were named for the Dale and Dyerson families who homesteaded in the area. 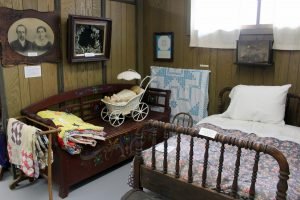 On the left hand wall is a framed mourning wreath made from human hair. The design is in the shape of a horseshoe. This art flourished during Victorian times in the late 1800’s. Next to the mourning wreath is a portrait of Mons and Elisabet Hanson who came to McFarland in 1867. Elisabet is the great aunt of Dorothy Nelson Helmke. Mons was a shoemaker and was a partner of Pete Nelson in their shoemaking shop on Main Street.

Children’s clothing decorated with crocheted and tatted lace hang on the right hand wall. A Hardanger embroidery piece hangs on the back wall left of the bed. Hardanger is a form of embroidery traditionally worked with white thread on white even-weave cloth, using counted thread and drawn thread work techniques.