The earliest Norwegian immigrant home was sparsely furnished with only the basic essentials. In it the family placed the few treasured items they were able to bring with them  in their traveling trunks from Norway. Furniture such as tables, chairs and beds were crafted from wood at hand. Little by little various items were added – either handmade or purchased – so the kitchen would eventually contain many of the items that are exhibited here.

The Jotul Krumkake iron made in Norway could have been one of the treasured utensils brought in the trunk from Norway. Krumkake was a delicate, crisp cookie baked in this iron and rolled while hot around a wooden cone form. It was made especially for Christmas.

Potatoes were a staple in the everyday diet and were also used in make lefse – soft flat bread. The lefse rolling pin with its ridged surface used to roll out lefse or flatbrød might also have been brought from Norway. A lefse stick to turn over each round was easily made in this country. 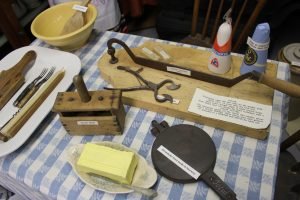 Pudding called “graut/grøt” and “rømmegraut/rømmegrøt” was made with cream and flour. A tvarra/tverleva shown to the left of the stove pipe was twirled between the palms of the hands to mix the pudding. As the flour and cream were stirred together, the butter in the cream rose to the top. The pudding was served with sugar and cinnamon. Rømmegraut was traditional taken to mothers after the birth of a baby. Aside from being crafted from wood as show 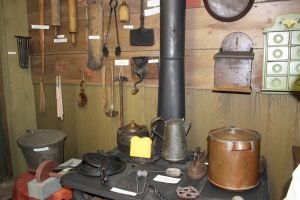 here, the tvarra/tverleva was also easily carved from the top of a Christmas tree. There are many spellings of this word depending on the dialect spoken.

The dough box was used to mix and knead bread dough and it held the dough while it was rising. Also in the exhibit is a dough bowl used f 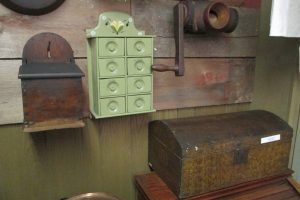 or mixing bread. The bread would be baked in the wood stove that was us
ed for cooking, baking and heating. The stove contains a reservoir for warm water. A dry sink with pump was used for washing dishes. The wastewater would empty into the wastewater container under the sink