The cradle has a long history and this small swinging or rocking bed for babies was typically one of the first pieces of furniture acquired in new households across America.   Infants were easier to soothe in a cradle as it mimicked movements experienced before birth.   The cradle was passed down through the many children of the family.

No doubt the earliest cradles were derived from a half log with a natural rocking motion. Carving out a safe resting place for an infant was done by placing hot coals on the interior of the half log and then scraping away the charred wood.

From a log the cradle evolved to a simple box mounted on transverse curved sections called rockers.   Using pine boards simply nailed together, the cradle was easily fashioned for the growing family.   A favorite cradle of many early colonists had sloping sides and a hooded end. The cradle was placed near the parents’ bed for easy accessibility.

In time the cradle began to be produced by the woodworkers who designed other home furniture. Slight variations of the cradle included Victorian, Windsor or Jenny Lind styles. A hanging swinging cradle was a popular variety. Gliding rocking cradles with pressed wood designs were made to be more attractive and safe.

Rock-a-bye baby, on the treetop,

When the wind blows, the cradle will rock,

When the bough breaks, the cradle will fall,

And down will come baby, cradle and all.

“Rock-a-bye Baby” has long been a favorite nursery rhyme and lullaby. The first printed version of these lyrics came from Mother Goose’s Melody in London 1765. About the only difference from common version of today were the beginning words “Hush-a-by baby.” The lyrics were adapted to song in the early 1800’s and by the late 1800’s “Rock-a-Bye” was a charming American ballad popular throughout all American cities. 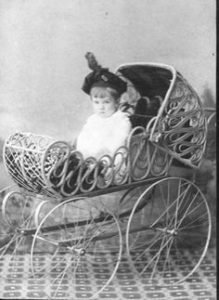 The prams, baby carriages, buggies, strollers- whatever you call them – were first invented in the 1700’s.   Not until the late 1800’s were modern strollers invented, changing the history of baby transportation. Built on spring frames that provided a gentle ride, they rocked a fussy baby to sleep. American wicker carriages were in high demand by Victorian mothers. They were lightweight and durable, handcrafted with ornate scrollwork and often sporting a parasol. Little girls were given toy wicker carriages, coaxing them to mimic their mothers. In 1880 a stylish wicker carriage from Sears, Roebuck and Co. could be ordered for $6.98.