Rockin’ Around the Christmas Tree

All Kinds of Rockers

1) Early Rocking Chair – This homemade rocking chair was likely just a hand-carved, straight back chair before the narrow curved blades were fixed to the notched legs. Early rockers like this one were often termed “carpet cutters” because of the damage done to carpets from repeated rocking in the same place. Early rockers were made with the blades extending somewhat equidistant behind and in front of the chair legs. The seat of this chair, on loan from Hans Hospel, was made with twisted rushes. Wood or woven seats were common in the early rocking chairs.  When chairs were expressly designed and made as rocking chairs, they often had heavier duty legs. The curved blades or “rockers” were often broader with some being up to three times as wide as the early “carpet cutters.” Using mortise and tenon joints, the legs were carved to fit snugly into the broad rockers (like rocki 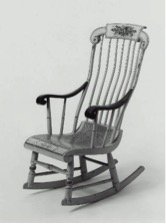 2) Boston Rocker – One of the most popular styles of standard rocking chairs developed around the 1840’s in New England was the Boston rocker.  It had long curved spindles topped by a larger crest rail to give neck and head support. Unique to this style was the thick wooden seat curved down in front and up in back. This made it more comfortable and supportive of the lower back. The legs straddled the narrow curved blades using bridle joints. Most Boston rockers had curved arms (see photo) to follow the curve of the seat. This rocking chair is a variation without arms. Boston rockers, like this one from Ruth Jaeger, were painted black and decorated. Boston rockers were the first style to be mass produced.

3) Wicker Platform Rocker – Flexible willow was long used for baskets and furniture. The development of wicker for rocking chairs was booming in the Americas in the 1850’s.   Wicker rockers became famous for their craftsmanship and creative design. This platform rocker is mounted on a spring base or platform and dates back to about the 1870’s. Platform rockers solved problems inherent in the design of standard rockers. They saved space, were easy on carpets and looked to be more comfortable. However, the spring mechanism which helped to balance and keep the rocker moving with minimum effort, would lose its tension with lots of use. The invention of steel coil springs with cast iron mountings eventually solved that concern.

According to donor Betty McConnell, this rocker belonged to Mrs. Mattern, who lived on the corner of Hough and Wisconsin. She would sit in it while looking out her window, rocking and knitting.   Note its continuous wide arms and intricate weave patterns.

4) Platform Glider – The glider varies from the standard rocking chair and the spring platform rocker in that it moves as a swing seat. By using two pairs of nonparallel swinging arms suspending the chair seat, the glider closely simulated the rocking motion. Because it didn’t have long rockers extending behind the legs, it could be located closer to the wall and saved valuable space. Most gliders like this one featured an upholstered seat. This glider was used by the family of Earl Anderson and will reside in the Larson House Museum.

5) White Child Rocker – This special rocking chair was a present for Tura Olson Graber from her parents, Hartman and Marjorie Olson, when she was a young girl in the 1940’s.   The decorative rosemaling was done by Stoughton’s most famous rosemaler Per Lysne, He and his wife immigrated to Stoughton from Norway in 1907. This master artist was responsible for the revival of the Norwegian Folk Art of rosemaling in America.

6) Platform Glider – Rockers like this were fashionable as well as comfortable and made their way into prominent homes.   Gliders from 1890 to 1910 were mostly made of oak with upholstered seats and backs. Gliding rockers on platforms were safer for toddlers and pets since the pinch points were moved away from the floor. This rocker, part of the Hartman Olson family for over 100 years was refinished and reupholstered about 15 -20 years ago.   Donated by Tura Olson Graber, it will reside in the master bedroom of the Larson House Museum.

7) Yellow Child Rocker – This particular rocker and Mia, a doll that made crying noises, will be displayed in the child’s bedroom of the Larson House Museum. They were special to donor Wanda Sawyer who played with them when she was a little girl in the early 1930’s. Wanda relates that she actually preferred a dark-haired sister doll named Susan. The rocking chair’s label reads “Heywood-Wakefield” – originally two very old furniture companies from Massachusetts that merged in 1921.

8) Press Back Rocking Chair – This standard rocker looks to have a decorative hand-carving in its curved crest but the design was created by press back technology which came along in the very late 1800’s. A steel die stamp with sharp edges was made by etching a design into a metal plate. Then it was mounted on a roller. Under great pressure, the roller plate was passed over a plain wooden, precut and steam-bent chair crest. This procedure resulted in a perfect impression of the original design, literally pressed into the wood and giving the effect of three-dimensional hand-carving.  Saving significant time and money, it allowed a mail order house like Sears to offer a dining chair in 1902 for 63¢ that had “handsome carving” on the back. This rocking chair came from the estate of Albert Skare.   The leather seat attached with studs adds to its comfort.

“Rockin’ Around the Christmas Tree” – This holiday song, written by Johnny Marks, was first recorded on the Decca label by Brenda Lee in 1958 when she was only 13 years old.